Foundations of Mathematics Shattered by Discovery that 1 Equals 2

Mathematicians at the Massachusetts Institute of Technology shocked the math world with the announcement that 1 equals 2. This discovery has wide implications for math, science and commerce. MIT Professor Lou Snut provided United Press the following proof: 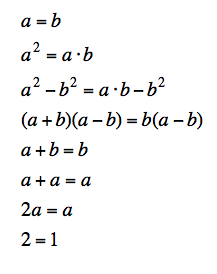 The shock waves from this remarkable discovery have spread beyond the halls of academia and are affecting the lives of people all over the world. At a local McDonald’s restaurant, we interviewed Ms. Bee Gass who had just finished paying for her double Big Mac, extra large fries and chocolate shake. “I can’t believe that McDonald’s has been giving me the wrong change all these years.”