Santa Proved to be an Artifact of Quantum Mechanics

Scientists who previously scoffed at the notion of a little fat man who can climb down chimneys, reindeer that can fly, and stockings filled with toys, now have conceded that Santa may in fact be as real as positrons and neutrinos (although a little heavier). Careful analysis of quantum mechanical effects has revealed that Santa does exist. “The Heisenberg uncertainty principle actually makes it certain that Santa is real”, said Dr. Robert Cratchit, of the Figgy Pudding Institute. “If you are surprised that the uncertainty principle can prove a certainty, it is because you are not smart enough to understand quantum mechanics”. Dr. Cratchit explained that Santa is neither a particle nor a wave but both at the same time. “Imagine an alcoholic drink that had caffeine in it. Improbable of course, but if you drank such a drink, you would be an example of the Heisenberg uncertainty principle – too numbed to rock and roll, but too wired to sleep. That’s exactly what quantum mechanics is all about”. 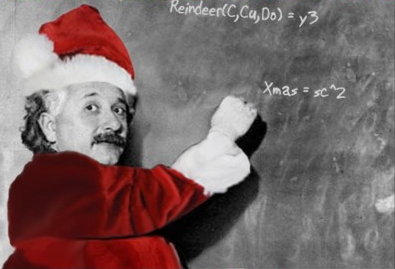 The research also revealed that Schrödinger’s cat is actually a reindeer, another example of the counter intuitive nature of quantum mechanics. Following the announcement of these research results, scientists worldwide have been sending Santa letters, requesting funding for various screwball research projects.